Secrets To Career Success From The World’s Most Powerful Women

Women entrepreneurs are kicking a*$ in the business world at the moment.

With more than 9.1 million women-owned businesses in the U.S., these amazing female entrepreneurs are pushing forward and building a stronger presence than we have ever seen before.

But who are these super women making such a huge impact? They’re talented women who aren’t afraid to leap beyond the norm and are creative enough to think outside the box. Women that are bold enough to inspire tomorrow’s female business owners to not only keep up with the boys, but to do better. These women are making the most of their online and real-world networks, making sure their voices are heard and turning failure into an opportunity to try again and succeed. Whether you're just getting your business off the ground or gathering the means to do so, you can learn a thing or two from these bada*$ women.

Sophia Amoruso, CEO and founder of online retailer Nasty Gal, rose from the trenches of eBay to become what Forbes has called “Fashion’s New Phenom.” Thirty-year-old Amoruso achieved all this just five years after leaving eBay. Her online retail shop made just over $100 million in revenue last year and features bold designs and attracts those with a risky fashion sense who have helped elevate Amoruso to cultural icon status.

What can women in business learn from her?

Kelly Cutrone is a familiar face to those who watch “Kell on Earth,” which gives viewers an inside look at her PR firm, People’s Revolution. Cutrone’s tough, no-nonsense approach to management helps would-be entrepreneurs get an idea of what it’s like to work with difficult clients, how to run a business on a tight budget and how to manage, not babysit, employees and interns. (In fact, Kelly named a book after her infamous advice for interns -- “If You Have To Cry, Go Outside.”) While Cutrone comes across as harsh and demanding, her management style has proven effective. It’s also helped her keep her PR firm alive and well, even through the recession.

Cutrone’s leadership style might not be for everyone, but she does offer some valuable advice: 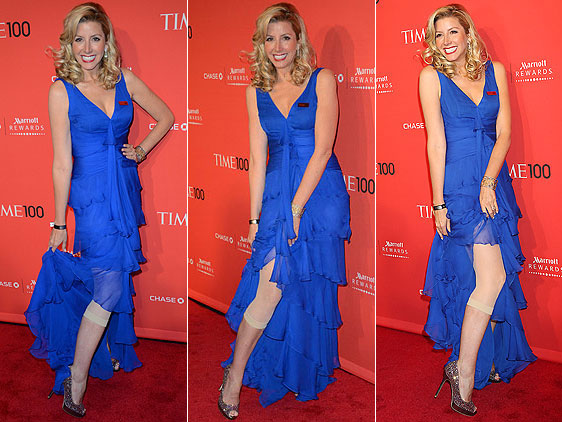 Sara Blakely, founder of Spanx, has brought in billions, but she started out with just $5,000 for her startup and a “never give up” attitude. It took Blakely two years to go from her idea for a better fitting undergarment that makes women feel slim in their hip-hugging clothing to having an actual product to sell in stores. Along the way, Blakely heard her share of “no” responses from potential manufacturers, but she finally hit it big and has made Spanx a household name.

Blakely credits her father for helping her learn that failure isn’t necessarily a bad thing, but more of life’s way of letting you know you may be off course. Her father would ask her and her siblings each day what they had failed at, and encourage them to try again tomorrow. In turn, she also offers the following advice to women in business:

Ramsden stresses the importance of thinking boldly in order to be a successful entrepreneur. Her advice to budding entrepreneurs includes:

Gina Bianchini’s outside-the-box thinking led to the creation of Mightybell, an online community that offers professionals more than other social media sites. Mightybell lets professionals set up their own social network, host events and meet others who are in their line of work. Bianchini didn’t achieve success with Mightybell the first time around, but that didn’t stop her from trying again. Instead, she’s taken that initial setback and made the most of it.

In an April 2014 interview that appeared in The Huffington Post, Bianchini offered the following sound advice to entrepreneurs: “Unlocking a great product is a process of rapid experimentation, a ton of failure and finding the bright spots to focus on...” In other words, embrace failure, learn from it and move forward. Bianchini also offers this advice:

These powerful words of advice from those who have made the most of failure, mastered the fine art of saying "no," built a strong online presence and broken the mold to come up with bold new products and ideas should help you join the growing ranks of successful female entrepreneurs.

Who is a successful business women that you really look up to? Did we miss any of your favorites? Let us know in the comments below!